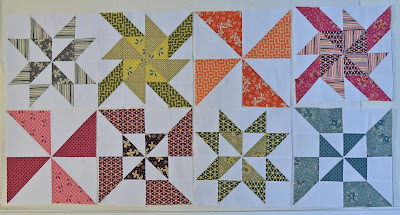 Happy weekend!
Posted by Melanie at 11:18 AM

I also have a problem with my irons leaking. I guess I should really stop buying the cheap ones, but I can't help it...cheapness is in my blood! Your workspace is very clean compared to mine; I guess i have to start cleaning it. I love your random quilt blocks, as the randomness of it is really beautiful :)

I have to say I have never had an iron leak. But I usually buy a more expenseive one, at half price, so I spend around $65 NZD. That's mainly because I need one that beeps when I have left it on, or I would have burnt the house down by now.

Irons drive me nuts. I'd *really* like that mega high priced super steam iron that I've seen at the AQS shows the last couple of years. But I simply cannot (yet) justify the money for an iron. *sigh*

I love your pinwheels -- too cute! I think it does indeed look like you've signed on for the long haul!

You work from home? How nice! Happy weekend! :)

your pinwheels look great! those blocks have been so enjoyable to make. i really like the hope valley and the white!

i have recently been having similar frustrations with my iron as well. when i first started quilting i bought a black and decker iron and it was AWESOME. last fall it died (*tears*) and i haven't been able to find a decent one to replace it. i am on my second one and it has recently started leaking. so irritating! i just want my black and decker back! :(

Cute sewing space!! The reason you hate your iron is the same reason you will hate all irons, science. The rubber seals inside your iron will change size as they get hot from your iron, and this causes leaks. As your iron fluctuates in temperature (using too much so it loses heat, not using it so the automatic timer kicks on turning off the heat) you will get little (or big) drops of water. The cheaper the iron, the cheaper the seal and the faster/worse the leakage will be. If you must have a steamy iron to be happy, wait until your iron is hot before you put water in, and drain the water from the tank when you are done to best avoid leaks. For me, I bought a $1 spray bottle from Ikea that I fill with water and put near my station and it works better than any steam iron I've owned. Also, I don't burn my fingers that way from a steaming iron. Phew. Everything you never wanted to know about irons!! I have got to make myself a tv tray, btw!

Your quilt is looking good! I love the pressing table idea!! Thanks for sharing. That would be a great addition to my craft room.

I have a Black & Decker iron. I've had it for years (this sucker made it through 4 years of college, with 5 roommates) and the only time it leaks is when I don't give the water a few minutes to heat up.

i bought 2 flat irons. one is proably from the 1930's or 40's. before they added holes an steam. they are great to iron everything.

I totallt feel the iron pain. I have yet another one that leaks.
What I do is keep the one that leeks to use in the craft room for dry ironing. As long as you don't need steam they are fine. They are especially good when you iron something that glitters. You don't want glitter over all of the jumpers that you wear.

Because we live in an area with hard mineral depositing water, I tend to use a spray bottle instead of the reservoir in the iron itself. Plus to get a better ironed seam or wrinkles smoother, I tend to put in a 1/2 and 1/2 mixture of water and vinegar. Hope this helps!

I've had two of those high price, automatic lift irons. works good until the touch dots wear off. i quilt lots so i get about two years out of it. i use the card table for a cutting/pinning/sorting table right beside my machine.

Hello, I just want to say I got so tired of leaky irons that I don't put water in my iron anymore. I use a squirt bottle and a dry iron. It works!!