I'm sure I won't be able to get five lines into this post without crying. Last month, I told my husband I was all cried out for April, but it seems the tears still flow freely in May. I'm not trying to be a downer, but if my blog is a journal of my life, this was the last four weeks. 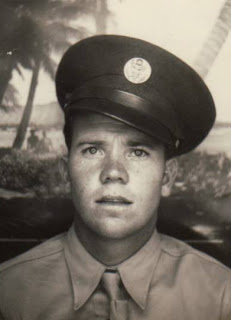 In the Army, circa 1940.
My Papaw (my dad's father) went into the hospital the first week of April with pneumonia. Prior to that, as in the previous week, he was driving himself to the Waffle House and doing his own grocery shopping.  We celebrated his 91st birthday last August, and he was still going strong. But, pneumonia takes a hard toll on aged lungs and after what appeared to be some improvement shortly after entering the hospital, his condition refused to improve.
After a week in the ICU, he was moved to a rehabilitation hospital. I have no idea why they call them that; it was the same facility where both of my grandmothers were transferred before they passed away. I spent as much time as I could at the hospital with him and with my family. He wasn't feeling very good and was really struggling to breathe, so he wasn't much for conversation at that point.  However, he didn't let even one of his grandchildren (of which I am the oldest) leave his bedside without telling them that he loved them and how proud he was of all of us.
After fighting for almost two weeks, his condition continued to deteriorate. Congestive heart failure began to complicate things, and recovery was no longer an option. I won't ever forget the moment he told me that Jesus was waiting for him. As a family, and with his wishes in mind, we made the difficult decision to move him to hospice care.
He passed away in his sleep on April 19th. My papaw was an amazing man. A strong Christian, a hard worker, and the handiest guy you could ever meet. He built my Mamaw the most awesome greenhouse when I was little and I remember spending hours in there potting plants with her. I didn't know until last month that Papaw had constructed the greenhouse out of discarded glass shower doors. Papaw was green before green was cool. I'm sure growing up in the depression helped him become the clever handyman he was. 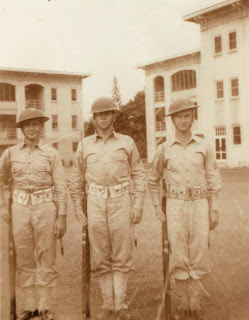 In the center at the Schofield Barracks in Hawaii, circa 1941.
He was also a veteran. Papaw served in the U.S. Army during the second world war. While stationed at the Schofield Barracks in Hololulu, Hawaii, the Army's ground defense for Pearl Harbor, he dodged bullet fire from Japanese Zeros on December 7, 1941 as they made their way to Pearl Harbor and attempted to destroy the Army barracks just north of the harbor on the way. He went on to serve in New Guinea and Australia before he came back to the states with malaria. 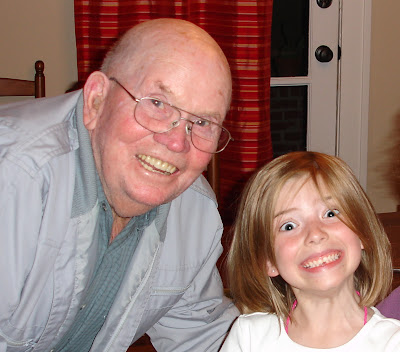 With Shea in 2006.
Although losing a loved one is inevitably a part of life, the foreknowledge that it will happen someday isn't much consolation when that day comes. Thank you, Papaw, for teaching me that the best beverage to drink with popcorn is milk, for teaching me how to stir syrup into my peanut butter and achieve the perfect smooth consistency, and for teaching me the game of 42. Thank you for raising two wonderful sons who grew into great men and teaching them the value of family. I'm going to miss you, Papaw.

Papaw's funeral was on April 22nd. Life didn't slow down as Shea's birthday was the following week. That third week of April was busy catching up on housework that didn't get done the first couple of weeks of the month and getting ready for a slumber party that weekend. Life was moving too fast to have time for tears, but just when you think you might get to catch your breath, wham! Another blow. 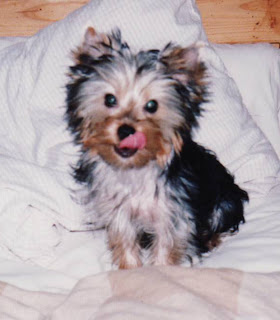 Puppy Gizmo
In March of 1997, the most adorable Yorkshire Terrier in the world came to live with us and we named her Miss Gizmo Matilda. We'd been married for four years and were childless, so Gizzy was our baby. It wasn't long, four months to be exact, when we decided to get her a playmate and brought home her brother from another mother, Buster.
Gizmo's age (she was 14 on February 20th) began to show the last few years. About three years ago, she developed cataracts and lost most of her vision. I think she could still see shadows and could always hunt down a little patch of sunshine coming through the window to lie in. If you've ever heard that Yorkies are hard to housebreak, believe every bit of what you hear. After losing her vision, Gizzy never could seem to make it to the door to tell us she needed to go outside, so any semblance of being housebroken was gone. The last year or so was really tough. 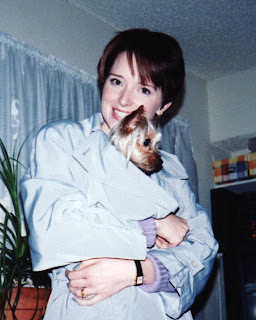 Me and Gizzy, March 1998
On the 27th, Gizmo started acting strange. She wasn't eating, but I thought it was because her mouth was sore from a trip to the vet the previous week to... um, well I'll spare you the details, but he worked on her teeth a little bit. On the 28th, she slept almost all day. When she finally got up at about 4:00 p.m., she was stumbling and having trouble with her balance. I called the vet, who had gone home for the day, and made an appointment for the next morning at 7:20 a.m. Her condition deteriorated very quickly that evening.  She went from not being able to walk straight to not being able to stand, then not being able to sit up, and having terrible trouble breathing. 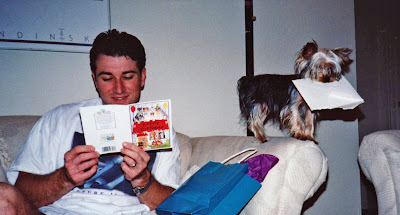 Gizmo's favorite pastime; getting her paws on some paper she could shred!
We debated taking her to a 24 hour clinic, but I really wanted her to see our vet. I stayed up with her until just after midnight on the 29th when I fell asleep after placing her in her usual spot, on a pillow on the floor on my side of the bed. After she lost her vision, I didn't let her sleep on the bed anymore because she would walk off the edge in the night. I woke up at 3:50 a.m. and reached down to touch her to discover that she had passed away. 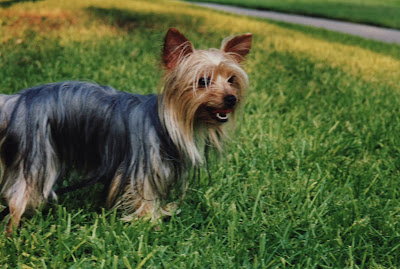 Gizmo around 1999.
When I was a kid, we had outdoor dogs that would come and go, but I had never developed an attachment to a dog until Gizmo came along. I sat down earlier to look for some photos of her which helped me realize possibly why losing her hurts so much. She and Buster were a major part of our lives for 14 years. Out first house, she was there. The birth of our daughter, she was there. Every Christmas since 1997, yep, there's a photo of her and Buster in front of the Christmas tree. Every event held in our house, birthdays, anniversaries, graduation celebrations, she was there, perched like a princess in someone's lap. 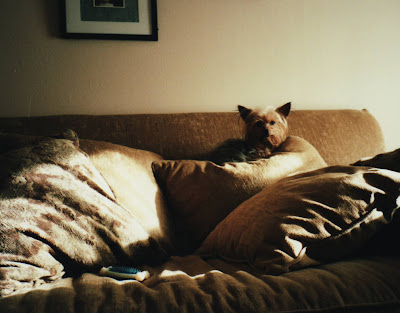 I had no idea the kind of grip that puppy had on my heart until she was gone. I can't think of her without my eyes flooding with tears. Another inevitable moment that you know will come someday, but I could never have imagined this pain. I'm sure the circumstances aren't helping. I feel guilty for not taking her to the 24 hour clinic. I feel guilty that she died right there next to me, but was alone because I was asleep. I know that guilt is a useless emotion, but I can't shake it yet. I suppose it will get easier, but right now it really, really hurts.
So, April 2011, good riddance. There were glimmers of happiness as we celebrated our 18th wedding anniversary and Shea's birthday, but in general, April stunk. I'm hoping May can bring some peace my way. I covet your prayers right now as I struggle for a glimmer of the bright side.
Posted by Melanie at 7:32 PM 60 comments: